Everyone dreams of something.  Terry Beishline dreamed of starting a volunteer emergency service.  He and five others who shared his dream (Rich Williams, Dave Bennett, Brian Mather, Chuck and Cheryl Greene), along with community support, established the Vestal Volunteer Emergency Squad (VVES) in 1975.  At first the squad answered calls with the Police Department, but by January 1, 1976 crews responding to emergencies consisted of two Squad members and a Police officer driver.

After completing an emergency medical technician (EMT) course, the Squad received New York State Certification in April 1976 which allowed them to operate with Squad drivers.  With the help of the Union Volunteer Emergency Squad (UVES), VVES started Advanced Life Support service in August 1976.

VVES squad members worked out of two small rooms in Town Hall until the former Twin Orchards Community Center building on Myrtle Street was renovated as the squad’s new home.  Over the years the VVES has incorporated changes that have strengthened their organization for the good of the community.  During the September 2011 flood, several areas of Vestal were particularly hard hit, including the VVES headquarters which required major renovation.

In the spring of 2021, work began on a new $2,000,000 VVES headquarters on the Parkway next to the Vestal Public Library.  The new facility features sleeping quarters, a kitchen, a meeting room and space to house several emergency response vehicles.   VVES officially started operating out of this new station on October 14th, 2022. 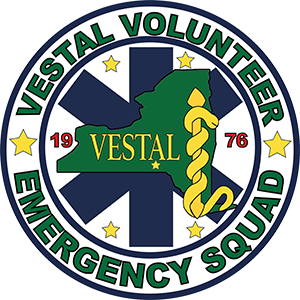